Let me first state, I am not a fan of stadium ‘gigs’, period.

However, that said. Once in a while, there comes along an act!

An artist, or band that makes the stadium experience worthwhile.

The queueing, the vast crowds, some 50 thousand plus in this case. The overpriced, well, everything. The somewhat lack of immediate connection with said artist, because well, you can’t actually ‘see’ them in any meaningful way.

Billy Joel is one such act. Oh yes! A couple of minutes into “My Life” and the growing sense of, this has the makings of a great night, turned into a terrific night.

Now!! This is how I started the blog. Written up the next day.

I have since found out, after reading various reports, that the ‘terrific’ night that had been my experience was unfortunately, not the same for everyone. With lots of people who had paid, not an insignificant amount of money. Quite literally not being able to ‘see’ anything, not the stage, (except a fully enclosed side of it) so therefore not a glimpse of Billy Joel or of the band. With this being a stadium there were naturally large screens. Which were not visible either. Explanations, reasons for this ‘mistake’ have since been forthcoming. It in no way reflects on Billy Joel.

It’s my  understanding that anyone that was affected by the seating ‘chaos’ will be eligible for a refund! I hope so. Having got that off my chest!

It is at this point I will return to my experience of Billy Joel. The screens, light-show all set the show up! The Billy Joel ‘Greatest Hits’ (with 5 decades of material to choose from) show was well and truly underway.

Moving smoothly through My life, Pressure and The Entertainer. We then get our first taster of what will be coming later. As he launches into a short version of Elton John’s ‘Your Song’ ending at the line “Don’t have much money” followed by “Yeah Right” and a big smiling face.

We now reach the first ‘fan’ choice of the evening. Loudest Cheers win!

‘Vienna’ (Preceded briefly by ‘Rule Britannia’) Taken from ‘The Stranger’ album. This track chosen over ‘Just the way you are’ by the Old Trafford Crowd. By now Billy J is coming across relaxed and seems to be easily engaging with 50 odd thousand people.

Next fan choice! ‘The Longest Time’ taken from the ‘An Innocent Man’ album. (Actually chosen over the title track, ‘An Innocent Man! by the O.T. crowd. We had already ‘enjoyed’ a rousing  version of ‘Longest Time’ on the way to the stadium from a choir of fans. Enthusiasm however, isn’t always a guarantee of quality. It still raised a smile though.

Half a Mile Away, and Zanibar, which is actually the 3rd song on the night from the album, as ‘My Life’ which Billy opened with is also on 52nd Street.

‘New York State of Mind’ followed, a firm favourite of mine taken from ‘Turnstiles’

“The hits just keep on coming” as they used to say, (still do on some stations!) on the radio. ‘Movin out’ (Anthony’s Song) 2nd one from the ‘Stranger’ ‘Don’t Ask Me Why’ from ‘Glass Houses’

Around this point we are treated to the next selection of (shortened) tunes that have made an impression on either Billy and one or more of his band. Moving through amongst others, (I apologise if I miss some tracks here, they came thick and fast)

Back to the Billy Joel songbook. ‘The Downeaster Alexa’ the first taken from ‘Stormfront’.

‘Alletown’ 2nd one from ‘The Nylon Curtain’ (first one being ‘Pressure’ at the beginning of the set.) A brief snatch of Hendrix’s ‘Fire”

‘Sometimes a Fantasy’ 2nd one from ‘Glass Houses. ‘A short dalliance with Queen’s Bohemian Rhapsody!

‘She’s Always a Woman’ 3rd one from ‘The Stranger’. River of Dreams’ taken from the album of the same name. embellished with a dash of The Beatles ‘Hard Days Night’. Now I grew up when the Beatles were around, and I am always happy to hear their songs covered if done well. Which H.D.N. was.

I was not at all prepared for what came next, which was a really ‘classic’ full length version of the Beatles, ‘A Day in the Life’.

Equally unprepared for Puccini’s ‘Nessun Dorma’ not sung by BJ but by his longstanding sideman Mike Delguidice, who plays guitar and keyboards in the band. I’m always on edge when the song builds to the last vocal. He nailed it!!

How do you follow Giacomo Puccini! Has to be ‘Songs from an Italian Restaurant’!! 4th one from The Stranger. Another song I have alway liked. The show closes with the title track from ‘Piano Man’.

(We all know that it’s not over)

It doesn’t come much better.

‘We Didn’t Start The Fire. from ‘Stormfront’ An all time favourite of mine! ‘Uptown Girl’ from Innocent Man. Last 2 songs both taken from ‘Glass Houses’

(Coming up to 2 and a half hours in, at 69 years of age Billy Joel still delivers.)

That was how I remember the evening. If I missed any songs out, I aplogise!

My heartfelt thanks to my Daughter Janine who spotted the tickets ages ago and invited the ‘old man’ along. x 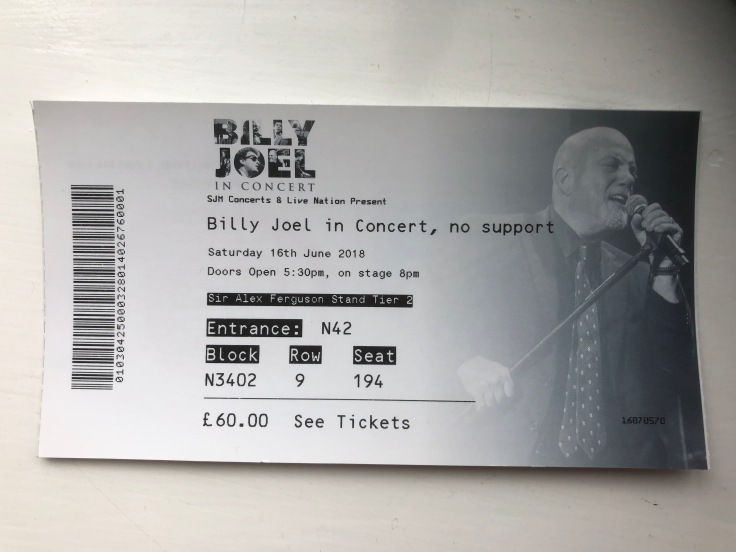